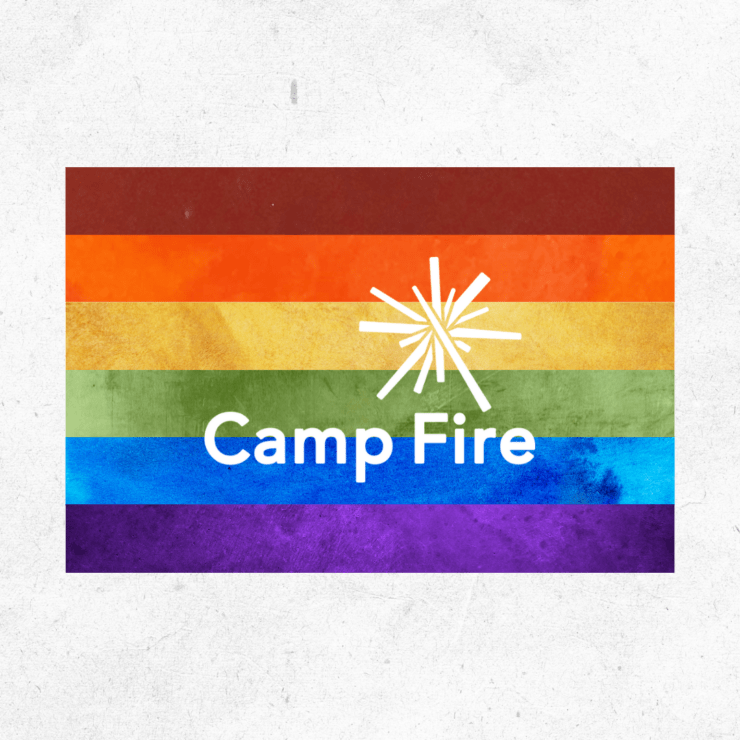 In 2019, Camp Fire expanded our inclusion statement to get a lot more specific about all the ways young people might define themselves—and how we welcome, affirm and support everyone. One of the categories of diversity that we actively celebrates is gender identity.

Young people are leading us in our understanding of gender diversity. A majority of young adults say that they see gender as a spectrum, instead of a binary male/female identity.

Research estimates that 1.2 million American adults identify as nonbinary, and most are under 29 years old.

This youth-driven shift in how our culture perceives, communicates and celebrates gender can be confusing for those of us who grew up with a more static understanding of gender. So we wanted to dedicate some Camp Fire blog space to the latest resources on young people and gender identity to support continued learnings—ours and yours!

What is gender identity?

To quote the American Academy of Pediatrics:

“‘Gender identity’ is one’s internal sense of who one is, which results from a multifaceted interaction of biological traits, developmental influences, and environmental conditions. It may be male, female, somewhere in between, a combination of both, or neither (i.e, not conforming to a binary conceptualization of gender).”

Or, more simply, as Gender Spectrum puts it:

“Gender identity is our internal experience and naming of our gender. It can correspond to or differ from the sex we were assigned at birth.” 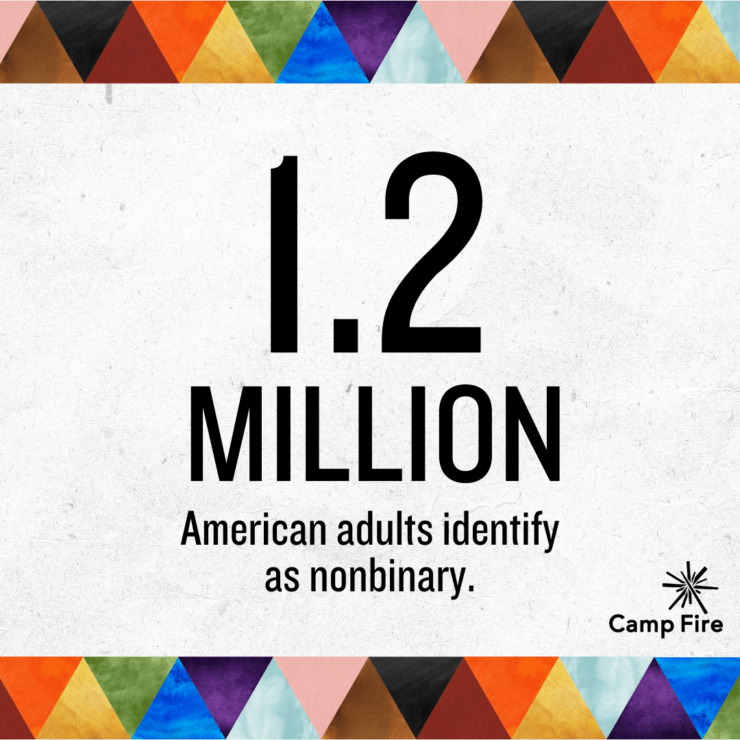 Here are a few common misconceptions about gender identity:

1. Gender identity is not the same thing as sex. Sex is a label given at birth, based on physical characteristics. Usually this is described as “male” or “female,” but in 1.7% of all births, “intersex” babies are born with bodies that don’t fit into one of those two binaries. Someone’s gender identity could line up with the sex they were assigned at birth, or not, or anywhere in between (i.e., the spectrum).

3. Gender identities outside of “man” or “woman” are a not new thing. Cultures across the world “have…long-established traditions for third, fourth, fifth, or more genders.” Here’s a handy map of some of them, created by PBS.

This may be new information to you, and that’s ok! We’re here to learn together. Here are some good places to learn more about gender identity:

• Gender Spectrum’s has in-depth educational resources for everyone from parents to educators to social service workers.

• The GENDER book: The most requested pages of this friendly, illustrated guide are free to download; the whole e-book is $15. 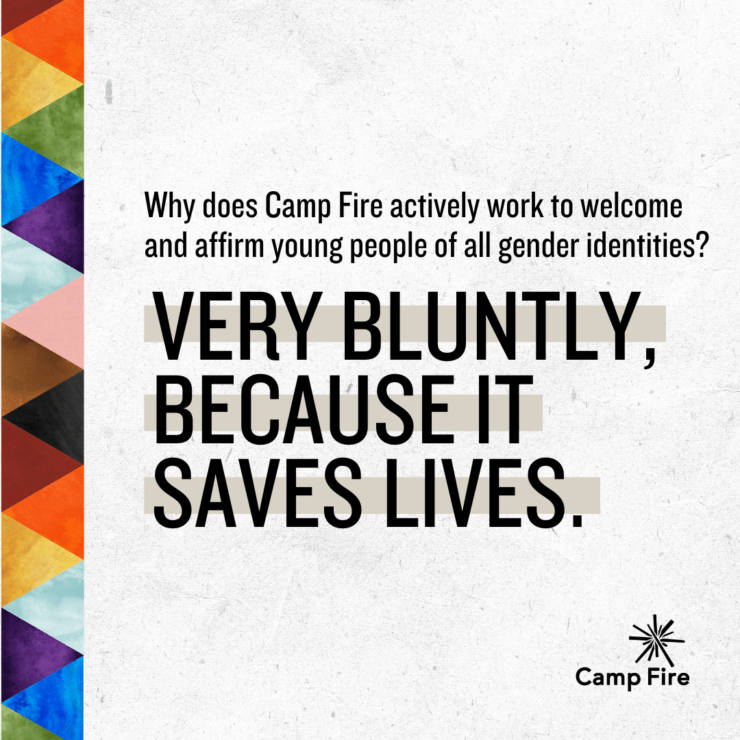 Why does Camp Fire actively work to welcome and affirm young people of all gender identities?

Very bluntly, because it saves lives.

• More than half of transgender and nonbinary youth have seriously considered attempting suicide in the past year.

• 82% of American adults who identify as nonbinary report being emotionally abused as a child.

• Transgender and gender expansive youth are 2 times more likely to be sexually assaulted or raped than their LGBTQ peers who have gender identities that match with the sex they were assigned at birth (“cisgender”).

But there is hope: Having supportive adults in their lives can make all the difference to gender-diverse young people. In fact, when transgender and nonbinary youth lived in homes where their pronouns were respected, their suicide rates were 50 percent lower than those who did not.

Not surprisingly, having access to spaces that supported their gender identity also lowered suicide rates for LGBTQ2S+ young people.

And that’s not all. It is core to our values and our vision: a world where all young people thrive. We want youth to “develop meaningful relationships with supportive adults and peers; they feel seen, heard, accepted, supported, and affirmed for who they are today, and who they will be in the future.”

Who among us doesn’t want that?! Being seen, heard, accepted, supported and affirmed for who we all are is everything. That’s why Camp Fire is committed to creating safe and inclusive environments where young people of all genders know they are valued, respected and very much needed in the world. 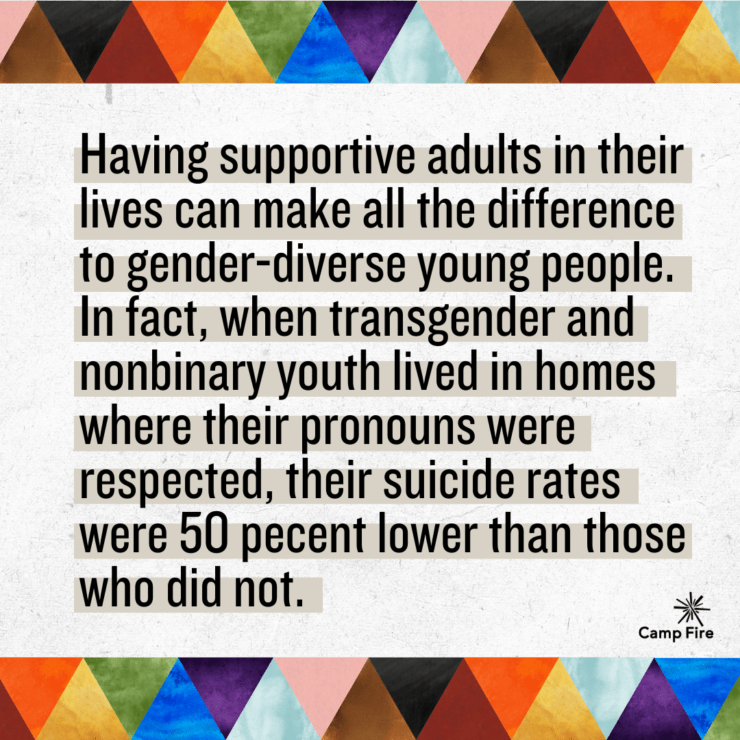 Want to help gender-diverse young people know they belong? Here are some resources on how to support young people in age-appropriate ways:

• This guide from our mental-health partner On Our Sleeves is incredible: “How To Talk to Kids About Gender”
• Gender Spectrum has many resources on how to support young people, including “Supportive Parenting,” which has ideas that all caring adults can use to affirm the kids in their lives.
• From Children’s Mercy, “8 tips to support kids when talking about gender” shares ways to have open conversations about gender.
• “Gender Identity Development in Children” is a helpful article from the American Academy of Pediatrics with ideas for parents and caregivers.
• You-ology: A puberty guide for every body is an inclusive guide for older, pre-pubescent kids published by the American Academy of Pediatrics. Here’s a helpful excerpt from the book on gender identity.

Regardless of gender, at Camp Fire Central Oregon, you belong here.