Throughout the long history of women struggling to find a foothold in positions of power and influence, a few women stand out as exemplary. Evelyn Lenore Gardner Ballard de Ghetaldi is one of them. Sadly, the world lost her courage and compassion when, at age 98, Dr. de Ghetaldi passed away in late December.

“…[M]y mother was a forward thinker, wanting youth to just get along in a safe and accepting place where they could all be what they could be. My mother wanted no barriers to be placed between one anther, stooping to allow each and every child, and even leader, to be all they could be.”

Throughout her career as a physician and educator Dr. Evelyn de Ghetaldi sought to empower young people, especially young women, to dream, to have lofty goals, to break free of societal voices that sought to dim or constrain those goals. Before Camp Fire began lifting up lives to “Light the Fire Within,” Evelyn was encouraging young women not to dim their own light or the dreams that defined them. Generations of children, their children, as well as organizations throughout the country live better lives today and have become better organizations of service for good because of this undaunted, pioneering woman.

Camp Fire had the good fortune of being one of them. In addition to teaching and practicing medicine, Dr. Evelyn de Ghetaldi was also very committed to public service, always striving to make the world a better and more just place. In 1975 she became the national president of the Camp Fire (then Camp Fire Girls.) She immediately led a pioneering effort to expand membership eligibility to boys and helped the organization become more welcoming to differently abled populations.

“My mother seems to have been before her times,” Laura said.  “That is the underlying of vision of Camp Fire and that is what my mother her believed in. ‘That light that has been given to me, I desire to be given undimmed to others.’ I believe with my whole heart that Camp Fire has been creating a whole new generation of [youth] that can help make positive and empathetic changes in this world of ours. “ 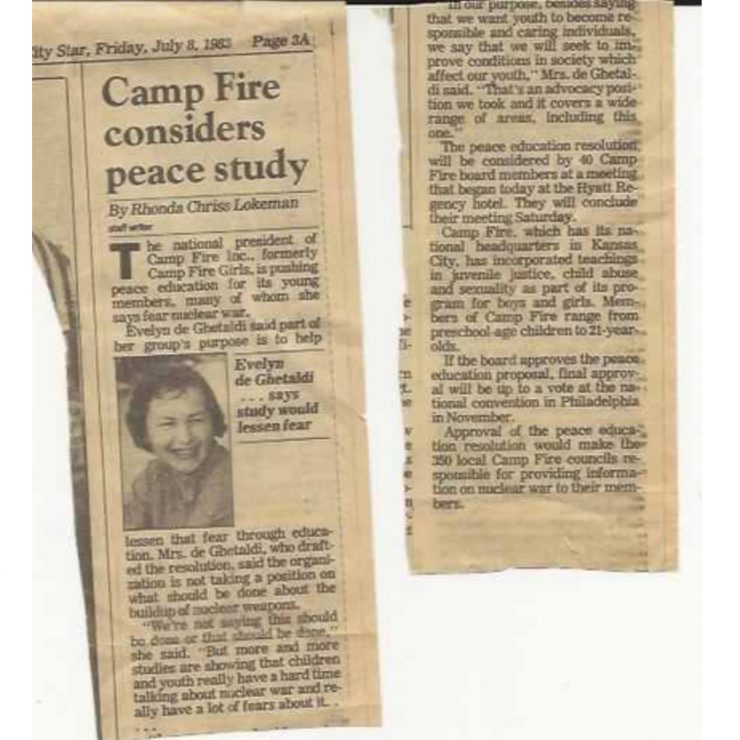 Activism was always central to Evelyn’s life, especially activism for women. Though she was born before women had the right to vote, before she died she defiantly cast her last vote for a woman for the House, a woman for the Senate, and a woman for President.

With her passing, Evelyn leaves behind countless memories and a lasting impact on those whose lives she has touched. Her story is one of strength, compassion, and equality. Her legacy of caring and commitment will be carried forward by the large community of family, friends, colleagues and the students she loved and worked with throughout her life.