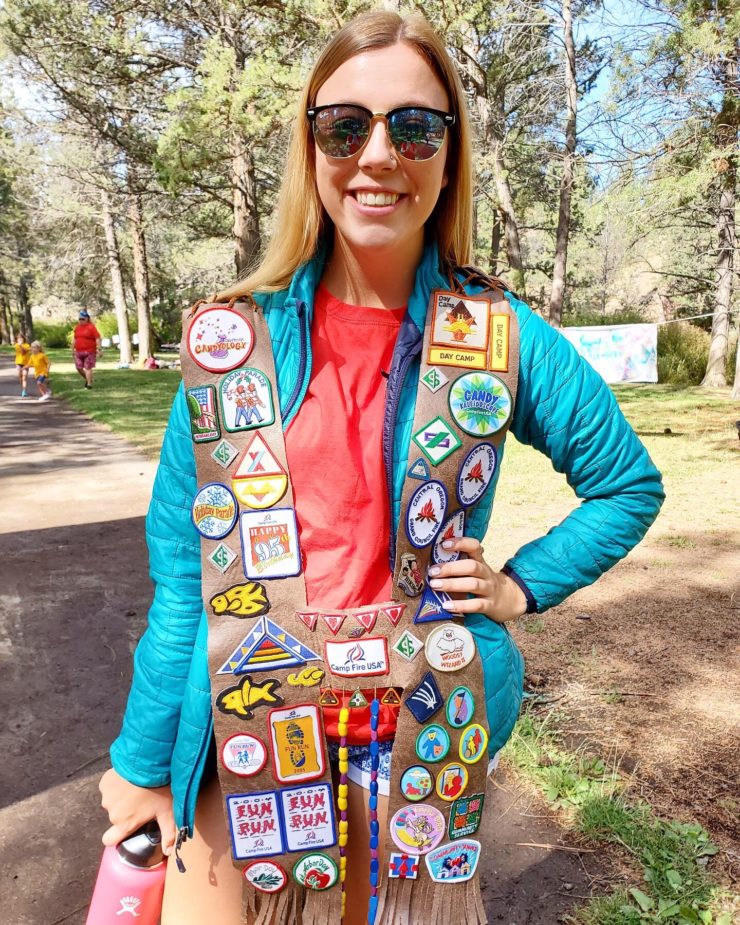 During the month of July, we are celebrating our alumni! First up: Amber Goemaat. Amber participated in our programs from 1st grade all the way through high school, and has since been a counselor at both SummerKids and Tumalo Day Camp. She earned her WoHeLo in 2014--the highest achievement for Camp Fire youth and an intensive process that takes hard work, dedication, motivation, creativity, determination, and discipline.

Amber is currently pursuing a master's degree in counseling at OSU Cascades with plans to become a School Counselor. Check out our interview with Amber below!

Where are you from?

I was born and raised here in Bend, OR!

How do you describe yourself?

I would describe myself as highly ambitious, motivated, confident, and adventurous. I am a counselor, teacher, spanish-speaker, daughter, sister, and friend.

How long have you been a part of Camp Fire and in what ways (past and present)?

I became involved in Camp Fire in 1st grade by participating in after school clubs, SummerKids, and Tumalo Day Camp. I continued with these programs throughout my elementary years, and became a CIT at Tumalo Day Camp entering 8th grade. In high school, I was asked to be the CIT Director, served on the board of directors, and lead after school Camp Fire clubs for elementary and middle school students. I was a counselor at SummerKids for three years, and have been a counselor at Tumalo Day Camp for six years. I earned my WoHeLo in 2014. I plan to stay involved throughout the school year by mentoring teens to earn their WoHeLo awards. I have worked in nearly every capacity with Camp Fire aside from professional staff.

What led you to Camp Fire originally?

I was originally led to Camp Fire by joining an after school club at my elementary school where several of my young friends were involved. Camps were one of the most affordable childcare options in Bend, so my mom enrolled us all summer.

What did you learn as a Camp Fire participant? How did Camp Fire impact you?

As a Camp Fire participant, I was able to try a lot of different activities that I wouldn't have had access to otherwise. I learned outdoor skills, completed creative projects, and went on trips to new places. Beyond this though, I learned the foundation of my leadership skills in Camp Fire. I had opportunities to lead youth, and learn how to communicate with adults. I gained so much confidence in the work I was doing, that it inspired me to pursue my current career as a School Counselor to continue to work with youth and help instill the same confidence in them that I learned from Camp Fire. I also gained life-long friendships with many individuals, and I know I always have a home with Camp Fire.

What’s your favorite part of “camp”?

My favorite part of camp is getting to know the campers, watching them develop relationships with one another of the week, mentoring teen leaders, and fostering an appreciation for the outdoors.

What are your “sparks”?

My sparks are teen leadership, being in the outdoors, and service projects.

Were you inspired by an adult mentor? If so, how?

I was inspired by Cece, who always encouraged me to seek new opportunities and grow as a leader. She is the reason I earned my WoHeLo award, and why I come back to Camp Fire year after year.

Any parting words/something to add that might be interesting to our community?

Camp Fire is so much more than just summer camps and after school programs. It is a network of leaders, a chance to try something new and grow, and a community both big and small. I have had managers in interviews recognize the WoHeLo award on my resume, and my work with teens has guided me into my Masters degree. Thank you to Camp Fire Central Oregon for allowing me to be a part of your community.